When we first drove and reviewed the Hyundai Santa Cruz, it was the best choice in a compact pickup truck segment of exactly one. Not only was it smaller than other trucks, but it had a car-like unibody structure. Effectively, it’s a crossover truck. That made it lighter, more agile and more efficient in terms of both fuel consumption and interior space. It also made it less robust for off-roading and towing (even if its ground clearance and 5,000-pound max are better than the average crossover), while its diminutive size includes a relatively rinky-dink 4.3-foot bed. There were definitely pros and cons with the approach, but it seemed like a generally agreeable formula.

In the end, neither is better than the other. They’re just different. It’s best to view the Santa Cruz as an alternative to outdoorsy compact crossover SUVs. Its open bed is still far longer than an SUV’s cargo offers and obviously offers infinite height, while those clever bed features maintain the sort of security and all-weather protection provided by an SUV. If there’s a main issue it’s the slow and inefficient base engine, along with the much stronger turbo engine being unavailable on cheaper trim levels. 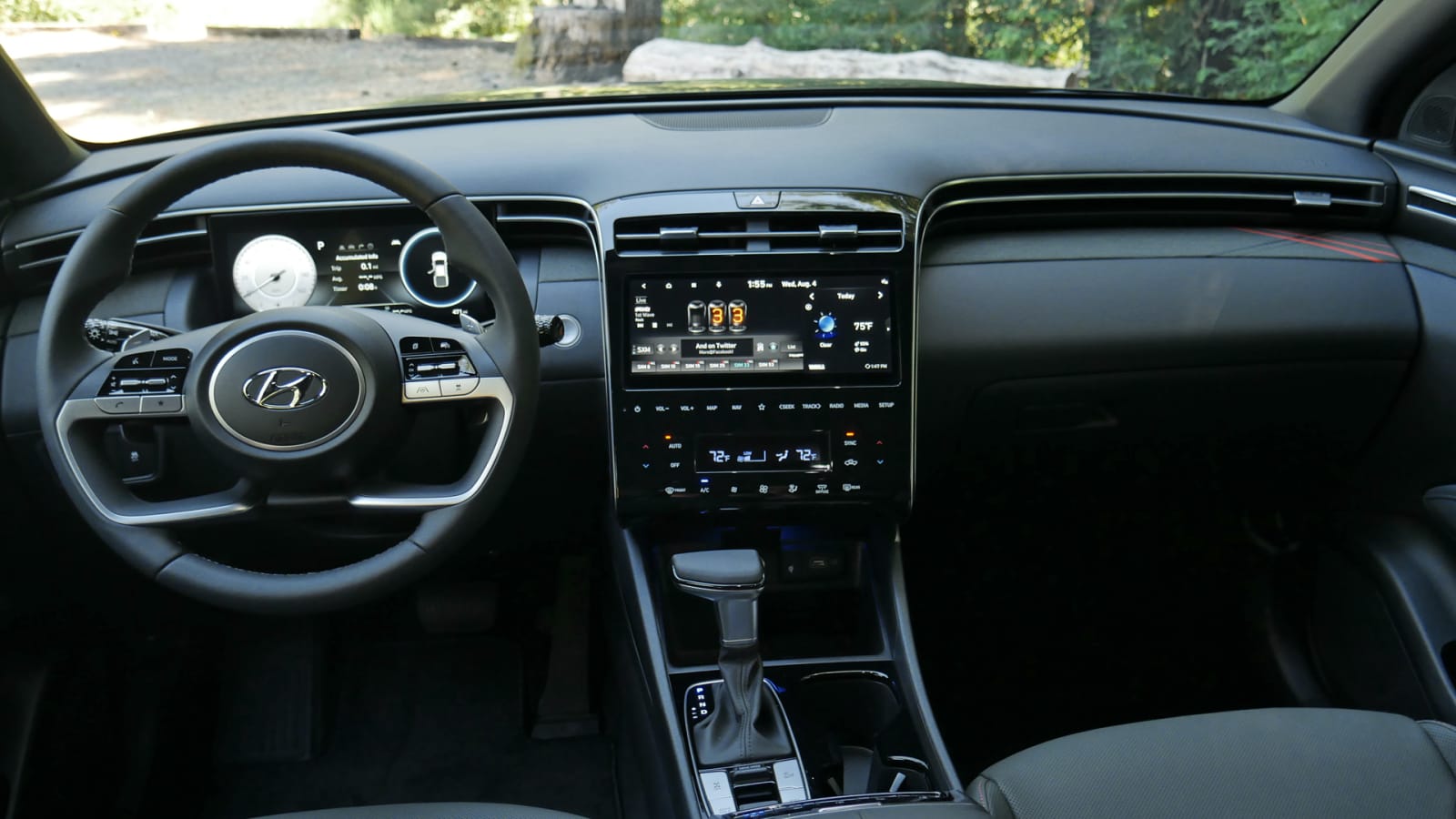 What are the Santa Cruz interior and in-car technology like?

The Santa Cruz interior has a more premium look and feel than average for a compact crossover thanks to everything forward of the B-pillar being shared with the impressive Hyundai Tucson. This gives the Santa Cruz a significant leg up on the Ford Maverick and justifies, at least to some extent, its higher price. In the Limited trim, the leather upholstery, extra-mile luxury features like ventilated seats and heated steering wheel, widescreen infotainment system and fancy-looking capacitive touch controls step things up even further.

As for the tech, Hyundai’s infotainment systems, whether the standard 8-inch unit or the 10.25 widescreen one shown below, are some of the easiest to use on the market while being feature-packed and modern in appearance. We’re less enamored with those capacitive controls. Though reasonably responsive, it takes too much concentration to find them with your finger amidst the glossy black expanse. Such controls have always had this problem, have always received backlash from owners and have always been replaced with conventional knobs and buttons with the next generation or sooner. We can’t see the Santa Cruz being any different.

How big is the Santa Cruz?

The answer to this really depends on what you’re comparing it to and which dimensions you’re looking at. For a pickup, the Santa Cruz is very small at 195.7 inches in length. Even the smallest midsize truck, the Nissan Frontier, is 210.2 inches long in its smallest version and goes up to 224.1. Even the Ford Maverick is 4 inches longer. Total height differences are similarly out of whack, but the Santa Cruz has plenty of ground clearance (8.6 inches) and overall width similar to those midsize trucks (and 2.4 inches wider than the Maverick). It’s also important to note that the Santa Cruz is more than a foot longer than the mechanically similar Hyundai Tucson, which is one of the biggest compact crossovers.

That size difference with crossovers is the result of the Santa Cruz’s truck bed, which is substantially longer than the cargo areas of most SUVs regardless of segment. On the flip side, though, it’s the shortest pickup bed currently on the market measuring 4.3 feet. The Ford Maverick’s is a bit bigger at 4.5 feet and more conventional in shape. What it may lack in overall capacity, however, it counters with plenty of clever features that aim to add versatility and security beyond the usual pickup experience. You can read our comprehensive Hyundai Santa Cruz pickup bed review here or watch our video about it below.

When we look inside, we flip things around again. The cabin can actually be more voluminous than the crew cabs of midsize pickups (especially the Toyota Tacoma), with a back seat that’s at the very least more spacious and comfortable. Often it’s better on both fronts. Then again, the back seat has considerably less legroom than compact crossovers and its backrest angle is more upright. We also found it to be a bit less spacious and comfortable (and less accommodating to a rear-facing child seat) than the Ford Maverick in this back seat review.

What are the Santa Cruz fuel economy and performance specs?

The Santa Cruz SE and SEL come standard with a 2.5-liter four-cylinder that produces 191 horsepower and 181 pound-feet of torque, which is a typical amount for the base engine of a compact crossover. It is paired with an eight-speed automatic transmission and standard front-wheel drive, but all-wheel drive is available as an option. EPA-estimated fuel economy is 22 mpg city, 26 mpg highway and 23 mpg combined with FWD, which is far lower than the 37-mpg Ford Maverick Hybrid. The base Santa Cruz engine returns 21/25/23 with AWD, which you can’t get with the Maverick hybrid. Maximum towing capacity with this engine is 3,500 pounds with trailer brakes and 1,650 without.

The SEL Premium, Limited and Santa Cruz Night come standard with a 2.5-liter turbocharged four-cylinder good for 281 hp and 311 lb-ft. That’s more robust, especially in terms of torque, than what you’ll find in midsize pickups. It blows away most compact crossovers as well as the 2.0-liter Maverick. All-wheel drive is standard and the transmission is an eight-speed dual-clutch automated manual. Fuel economy is nearly the same as the naturally aspirated version at 19 mpg city, 27 mpg highway and 22 mpg combined. Its maximum tow rating is 5,000 pounds with trailer brakes (the same 1,650 without), which is 1,000 pounds more than the Ford Maverick and much stronger than the typical compact crossover SUV.

The Santa Cruz is one of the most responsive and agile compact crossovers … regardless of what’s going on behind the C pillar. There is absolutely nothing truck-like about it, which is perhaps a bad thing if you desire a bouncy ride, tippy handling and slow steering. Otherwise, it proves to be shockingly sharp and capable of flicking about a twisting mountain road. Nudge the drive mode toggle into Sport and the steering loses its initial bit of off-center numbness in favor of just the right amount of extra effort. The suspension, with its independent multi-link setup at the rear, remains resolutely planted and composed. At the same time, the ride is on the firm end of the spectrum, but not in a truckish way. More in a Mazda CX-5 firm-but-well-damped way.

Then there’s the powertrain. We have not tested the 191-horsepower naturally aspirated 2.5-liter base engine, but our time with something similar in the Tucson would indicate it’ll be unrefined and uninspired, even if it makes competitive power and torque. We have tested the 2.5-liter turbocharged engine, which feels every bit as quick as its ample 281 hp and 311 lb-ft. We just wish you could get it on all trims, especially given its fuel economy relative the base engine.

We also wish Hyundai would offer a hybrid Santa Cruz. Besides its chief competitor, the Ford Maverick, coming standard as a hybrid, the Santa Cruz’s mechanically related Tucson sibling is offered in hybrid and plug-in hybrid models.

What other Hyundai Santa Cruz reviews can I read?

More in-depth information can be found in this review about the Santa Cruz’s unique design and the engineering that went into it, as well as our initial driving impressions.

We go deeper into the Santa Cruz’s many innovative bed features, including its lockable rolling tonneau cover and under-bed storage.

Comparing the back seat space of the Hyundai Santa Cruz and Ford Maverick, including for rear-facing child seats.

What is the 2023 Hyundai Santa Cruz price?

Pricing starts at $26,745, including the $1,295 destination charge, for the base Santa Cruz SE trim level with front-wheel drive. Adding all-wheel drive is a $1,500 option for the SE and SEL. It comes standard on those trim levels that come standard with the turbo engine.

The SEL Premium includes the Activity package along with the turbo engine and standard all-wheel drive, hence its considerable price jump from the SEL. The Limited steps things up firmly into luxury territory with leather seating surfaces, ventilated front seats, Bose audio, capacity interior controls and the 10.25-inch widescreen infotainment system you see here in pictures.

What are the Santa Cruz safety ratings and driver assistance features?

The Insurance Institute for Highway Safety named the Santa Cruz a Top Safety Pick for its best-possible crash test performance and its top-rated frontal collision prevention systems. The base headlights on the SE and SEL trims were rated “Poor,” however, preventing the Santa Cruz from getting the full Top Safety Pick+ award. The upgraded lights on the SEL Premium and Limited got the best-possible “Good” rating.