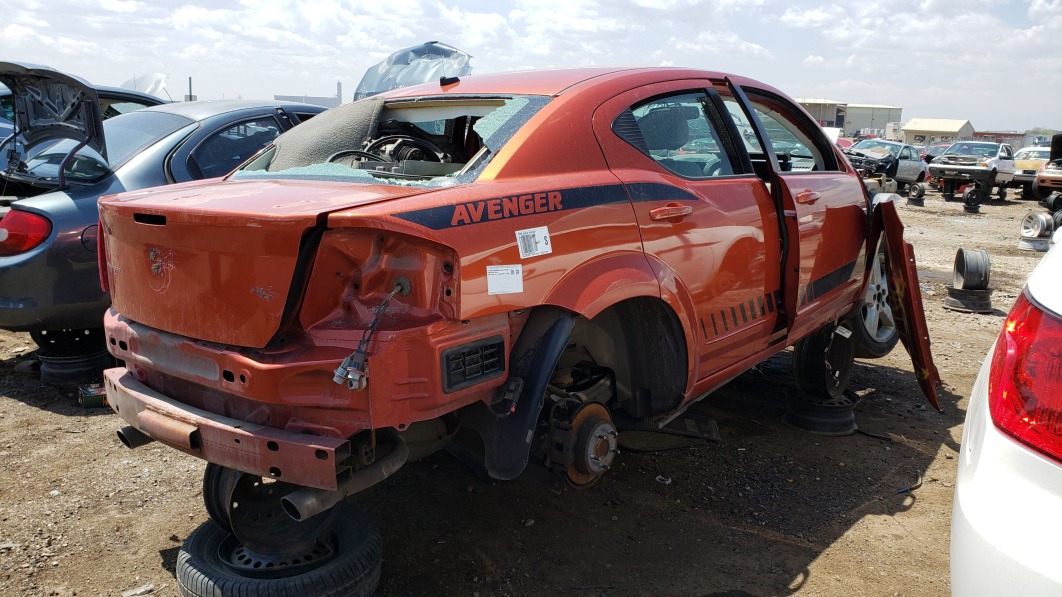 Remember the Dodge Avenger? Of course you do, because FCA didn’t get around to discontinuing it until 2014 (though new Avengers were still being sold as late as 2018). It was based on a Mitsubishi Galant-derived platform that got DaimlerChrysler-ized prior to being dragooned into the far-flung Fabbrica Italiana Automobili di Torino Imperium, making it a perfectly serviceable midsize sedan that lacked only a dash of AMC/Renault and perhaps Simca DNA to be the representative of every company with which Chrysler did business during the 1980-2010 period. What some of us may have forgotten was that there was an R/T version of the Avenger, and I’ve managed to find one of those rare machines in a Colorado boneyard.

The second-generation (2008-2014) Avenger sold very well as a fleet vehicle, so most of the examples you’ll see are low-spec cars with the base engine and exteriors done up in Soporific Silver or Tedium White paint (not the actual names for those colors). This one has shriekingly bright Sunburst Orange paint with graphics that wouldn’t have looked out of place on the cars of Chrysler’s Lysergic Era.

The SE came with the 2.4-liter World Engine four-banger, a powerplant developed by a Hyundai-Mitsubishi-Chrysler partnership that made 173 horses in 2008. The next step up was the 2.7-liter V6 engine originally designed for use in the Chrysler LH cars, and then there was the R/T’s mighty 3.5-liter SOHC V6 (seen here dangling out the bottom of the car because some junkyard shopper yanked the transmission separately). You got 235 horsepower in your ’08 Avenger R/T, which was non-shabby for a car that scaled in at about 3,600 pounds. Later Avenger R/Ts got a 283-horse Pentastar V6, which must have provided some front-tire-shredding, torque-steery fun.

Someone bought most of the front body components before I got here.

I expected to see an angrier air freshener here.

The later Avenger R/T was a fairly powerful and well-equipped car for the price, but sedans just don’t sell well in our current truck-crazed century and the Avenger had to go.

It would play Deep Purple on the dyno!